Terry Leonino and Greg Artzner began to play music together in Kent, Ohio in September of 1973. Terry was a student in her senior year at Kent State University in the fall of '73, and when she graduated the following spring, she and Greg, along with their band-mate at the time, Mark Cozy, packed Greg's VW bus and moved to the Washington, DC area. In the years since then, they have traveled and toured extensively, performed in concerts, at folk clubs and festivals around the world, and recorded many times. Acoustic bassist Paul Duff joined the trio for a year from 1975 to 1976. In '76, both Mark and Paul left the band and Terry and Greg continued on, once more as a duo.

Terry's voice is a truly impressive instrument, not only because of its natural power, but also because of her versatility. She is a gifted singer of jazz and blues in the tradition of Connie Boswell and Billie Holiday, but is equally comfortable with the subtle beauty of traditional folk and contemporary songs. Add to this her uncanny ability to find the perfect harmony line, and, in a powerful blend of their two voices, you have a real treat for the ear. As if this weren't enough, Terry is also an excellent player of the harmonica, mandolin, fretted dulcimer, and rhythm guitar.

Greg is an outstanding guitarist whose fingerstyle approach owes a lot to his heroes, guitar legends such as Reverend Gary Davis, Big Bill Broonzy, Nick Lucas, Phil Ochs, and Rolly Brown. His playing is the solid basis of Magpie's sound, providing whatever is called for, whether it be a hard-driving rhythm, or a ringing lyrical beauty. From a slow Scots air or a plaintive ballad to a rollicking ragtime blues or infectious swing, Greg covers it all. His high baritone voice has equal range and his captivating interpretation gives power and beauty to the full spectrum, from growling blues, to a Chilean lament, to a sweet croon.

From the beginning Terry and Greg's interests in various musical styles have led them to be eclectic in their repertoire. Rather than confine themselves to a single style, Magpie has always embraced a veritable musical rainbow, and with impressive proficiency in each different genre. From traditional, classic country, swing, and blues of the nineteen twenties and thirties, to contemporary songs written by themselves and others, Terry and Greg cover a lot of musical ground.

With the power of their delivery, Magpie is well known for their performances of hard-hitting topical songs. They are well-known as regular performers on Phil Ochs Song Nights, organized by Phil's sister, Sonny Ochs, since 1984. Politically, their viewpoint has been shaped by their life experiences. Greg began to play music in the early sixties as 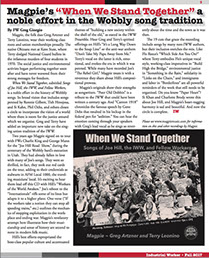 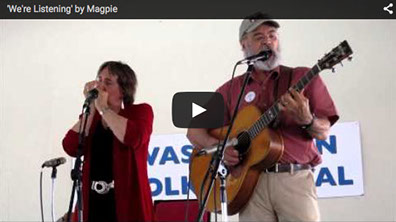